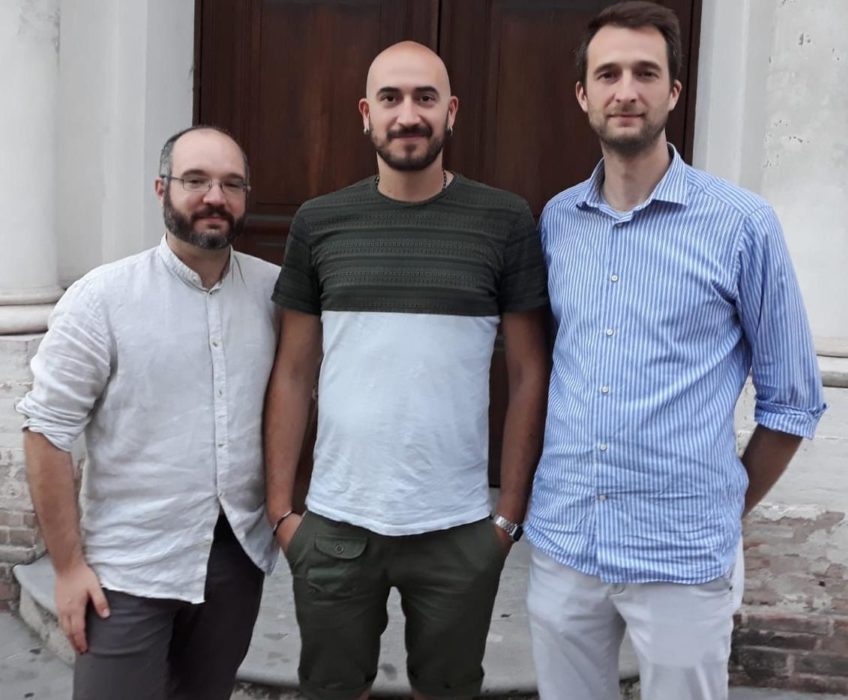 Up until just over a year ago A.G.MA. Geopolimeri was only a bet.

Hard work on a promising project and a convincing pitch gave the right push to this startup that conquered the podium at the 2018 edition of the Start Cup competition, arriving in third place. A place that, last december, allowed them to gain access to the PNI - National Prize for Innovation.

A.G.MA. stands for Advanced Geopolimerc Materials: the company develops innovative materials for the construction industry from thermoelectric businesses. The field is the environmental sustainability and circular economy one, and the "recipe" put together from the team based in Parma (made up by Alfredo Notarmaso, Lorenzo Sambo and Luca Barckhausen) is used in insulation, constructions and design industries.

“A lot of things have happened this year” Alfredo Notarmaso  tells us “We have continued to work on the research and development of the material, exploring new applications. Not only the "recipe" has improved from a technological and scientific point of view, but we, as a team, have had the chance to widen our skills taking ownership of our role as entrepreneurs" the co-founder continues.

Since they won the business plan competition, the three startuppers have been really busy. A month after the Start Cup, they flew to Edinburgh to take part in the Climate Launchpad, the biggest competition for green projects in the world.

We were one of the ten selected from Italy and amongst the 150 from the rest of the planet" Notarmaso reminisces "We had the opportunity to confront ourselves with many other realities, both similar and very distant also on a geographical level. For us, it's been an incomparable experience".

The international scenario A.G.MA. found itself in, offered even more new contacts for the three entrepreneurs after the Start Cup.

"We exploited all the consultancies and tools at our disposal" Notarmaso explains "After being selected for Phase 1, we have now moved on to Phase 2of the Climate-KIC Startup Accelerator: we have a coach who supports us and every ten days we take 4/5 hour classes with him. Furthermore, by taking part to these initiatives, we have gained access to funds that allowed us, for example, to open up a lab which is all ours for our research and development work".

As far as the team is concerned, the initial set up has remained the same. Depending on the needs they face along the wat, A.G.M.A. sets up external consultancies where the co-founders don't have the necessary skillset.

"We are very much concentrated on selling our products and looking for industrial partners, stockists and potential collaborations" the startupper specifies "We realise we can't take care of everything and on some topics, such as communications - which we have realised is extremely important - we delegate to external resources".

The Start Cup journet has certainly contributed to make this team who came from the academic world of scientific research understand how presenting their idea at best was key, but not only that.

“Our life has changed radically within a year, it's been a constant growth" Notarmaso reveals "The competition has opened many doors as, for example, the contact with the IREN research and development centre.  With them we have started a collaboration to use their waste material from incinerators and this brought us to starting a preliminary research with the University of Torino to develop a new material".

It's certain that the jump from the lab to the marketplace is a big one, often an unfathomable reality for someone who does only research.

"Working on our startup we have managed to understand the charachteristics of a market like the constructions' one" Notarmaso argues "It's very big and at the same time very conservative: it's everything but simple to convince someone to use a geopolymer instead of concrete to build their home. At the same time though, the possibilities are endless since the topic of environmental impact is starting to find its way into the contructions world too".

"Two years ago I wouldn't have bet a cent on myself as an entrepreneur, but I have to admit that I really enjoy this job" the startupper confesses. "I left my previous job to go all in on this adventure: for me it's an investment on all levels, not only financially but also personally. I know that we are still at the beginning and it's all uphill but we are very pleased with what we have done so far".

A.G.M.A co-founder's voice unveils a mix of emotions and enthusiams while assessing things one year from their Start Cup experience, especially when he addresses those who are in the same situation:

"I take the liberty of giving a piece of advice to everyone who is being held back by fear: don't let yourself be intimidated by something you don't know" he says, inviting other researchers to take into consideration the same adventure. "If you have an idea, go for it. We did that and we couldn't be happier for it".

Find out more about A.G.M.A. and check out their profile in our dedicated section "Linked Startups" by clicking on the banner below.